Just because of its flora and fauna, the salt pans of Fuencaliente would already be of high ecological interest, but there is another factor that multiplies this value: it is a spot where many migrating birds, rest, feed and sometimes reproduce.

In 1994, the Canarian government declared the salt pans of Fuencaliente an Area of Scientific Interest. The reason is that it is one of the few existing areas with water in the Canaries, especially on La Palma, and as such it acts like a magnet to migrating waders.

A place of rest and feeding for the bird colonies.

From autumn to spring, when many species of birds coming from Europe and going to Africa on their yearly migration, the Canary Islands become an obligatory rest stop for those birds on the rather more westerly routes. Some species even pass the winter on our islands and later return to Europe without ever reaching their final or initial destination in Africa. Others simply rest and continue their journey (birds of passage or migrating species) to their African destination.

On our coastline and especially in the salt pans, between 30 to 50 different birds species can usually be seen, feeding on the multiple organisms thriving in the salt basins. Therefore, in the salt pans of Fuencaliente in autumn one can observe plovers, dunlins, sandpipers, turnovers and even some rare species like flamencos and shelducks. .

Life in the salt basins:  a unique ecosystem.

The contents of salt in the basins, higher that in the ocean, houses some very special vegetable and animal species adapted to live in very saline environments.

From the three vegetable species, one particularly stands out: the Ruppia maritima, a phanerogam (surface plant with flowers), which has almost completely disappeared from the islands as saline coastal regions have become extremely sparse. This phanerogam is a protected species (By law of the 20th of February 1991 on the protection of indigenous species of the vascular flora of the autonomous community of the Canary Islands). Our salt pans are one of the very few places where this flower can be seen. 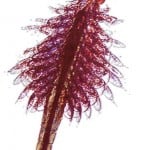 The Artemia salina is another one of these peculiar life forms of these habitats. It is a small crustacean capable of producing eggs, which dry out naturally when the water evaporates. The embryo however stays alive in a latent form for up to 10 years. These eggs are transported in the claws of migrating birds, and are re-hydrated and brought back to life when the ideal conditions are found in other pools or salt pans. Together with the rotifers, they actually form the basis of the fish cultivation industry in open waters, as they are an excellent food for fish breeding. The Artemia can live in the basins as well as in the pans with a high salt density and studies have proven that they can resist concentrations of 300 gram of salt per litre.